The Masai Mara Game Reserve is Kenya’s most celebrated and one of the strongest nature sanctuary in Kenya.

The Reserve is dominated by open grassland, with a great distribution of rocky hills, thorny acacia forests, and savannah woodland as urged by the Nilotic name Mara, which means noticed.

The classic African savannah forms the middle of common safaris in Kenya. One will divide the Mara Reserve into 3 distinct parts.

The Mara River is the only permanent rivers that flows through the Masai Mara Game Reserve. The water supply is vital during the annual Wildebeest Migration. The River is dotted with dozens of deep hippo pools. It is home to fish, crocodiles, and otters. The birdlife along the river include riverine birds like the hammerkop and African darter.

Whereas among some of the trees, you might catch a glimpse of Leopards, Vervet monkey, alongside some birds’ species like the secretary bird, Eagles, vultures among many more wildlife and bird species

The wildebeests can invariably gather on the banks in their thousands, when one of the wildebeests plunge in to the Mara River, the other herds of wildebeest break into a stampede. With hundreds of crocodiles in the river waiting to pounce on their next meal, it is truly a sight to behold.

Approximate 5000 wildebeests pass away annually whereas crossing the Mara river, however, the numbers usually replenish by the average of 400,000 calves born in Serengeti during the calving season(January – march).

Primarily comprised of open grassland, the reserve covers 1,500 square kilometers (579 sq. miles). In addition to the main reserve. There are other several conservancies where the Maasai villagers pasture their cattle.

Where is the Masai Mara? (Location)

The Mara is just a few degrees south of the equator, so the length of the day and the temperature are not quite fluctuating.

What is the Best time to visit the Masai Mara for a safari ?

The Masai Mara Game Reserve is accessible throughout the year. The game reserve boasts of a dense wildlife population, hence its is an all-year round safari destination.

The peak season is during migration from July through  to October. While in December and January, April and May the Masai Mara experiences high rainfall.

The Masai Mara has a wide range of hotel accommodation facilities. Our safari packages offer you a wide selection of either tented camps or lodges. Feel free to contact us so as to book and reserve your next safari holiday in the Masai Mara Game Reserve.

What Activities are available in the Masai Mara?

One of Kenya’s premier game viewing spots, if not the world, is the Mara that hosts an endless wildlife chain. The chances are high you’re going to spot all the famous “Big Five” game through seemingly infinite horizons of the reserve. Take advantage of our 6 Days Amboseli/ Lake Nakuru/ Masai Mara Safari or visit the best of Kenya and Tanzania’s Game parks by booking the 13 Days Kenya/ Tanzania Scenic Safari.

Imagine the Mara come to life during the early morning. You’ll encounter an endless river of herding animals below in this once-in-a-lifetime adventure, snaking off into the vast horizon.

Visit these indigenous cultures, meet, and learn about their history. See how they build their bomas or homes, look at their handicrafts, and perhaps even join in their famous jumping dance.

In conclusion, the Masai Mara Game Reserve is truly a wildlife-gem and it should be a must-visit safari destination while on an East African wildlife safari. We at Asili Adventures safaris are more than willing to take you to the Masai Mara and experience the real Kenyan safari experience.

You can book your Tailor-made safari with us or reach out to us via Email /phone or WhatsApp. 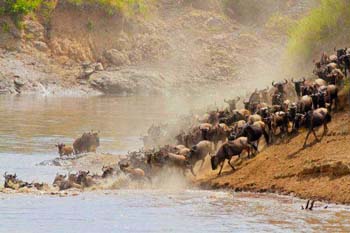